WHAT IS GIMP AND OTHER PRESSING (?) QUESTIONS

The first of the storms rolled through here about two hours ago...lots of rain, thunder and lightening.   The temperature did cool down but the humidity went way up - so the ac is on.   At least the humidifier part.    I opened the window in the kitchen while I was making something to eat.   It was definitely cooler, but I felt like I was taking a shower in the kitchen the humidity was so high!!!

So, a couple questions have popped up.   First of all, what is GIMP?   I have talked about it before but in case you missed it, GIMP is the free, online, photoshop-type software.   I am all for free software that is good.

Case in point, I use only OpenOffice as my word processing software.   It does everything from spreadsheets, presentations, drawing, database, formula, templates and, of course, text editing.   And it's free and works on my mac!!!

Well, GIMP is the same type of deal except it is like photoshop.   I can do the basic photo editing but it has far more editing gizmos that, say iPhoto has in its basic software.   Also, GIMP does layers - lots of them.   I am not as proficient at that part, thus, I want to spend time learning.

And now you are wondering about juggling, right?   Well, I found out about some tests that were done on folks my age (think 70) to see what, if anything improved memory.   Both the tests were done with small populations but both did give some measurable evidence as to the benefits for the test participants.

First, mental activity.   Participants were given things to do in a mental capacity such as crossword puzzles, word searches, reading and learning a new activity...in this case photoshop.   The brain images indicated that the person learning photoshop did in fact increase brain activity including new pathways more than any of the other participants.   (There's more too it than I am explaining but you get the idea.)   And although the sample was small, I figured that it certainly couldn't hurt.   And the bonus was that I would become proficient at using GIMP.

As to juggling, another test, again not a large sample, was done with physical activities.   The question was basically what would happen if one learned a new physical trait such as juggling or writing with the non-dominant hand.   Participants were to practice the activity for at least ten minutes every day for several weeks.

The outcome was that the brain decided that if the practice was going to continue, then it must make a 'muscle memory' for the activity which, again, increased the pathways in the brain.   Count me in on this one also.   I'm so bad at it that I am using bean bags so I don't have to go so far to retrieve the dropped ones...the balls kept rolling all over the place!!!

I am still enjoying my zentangling.   Here are my latest two... 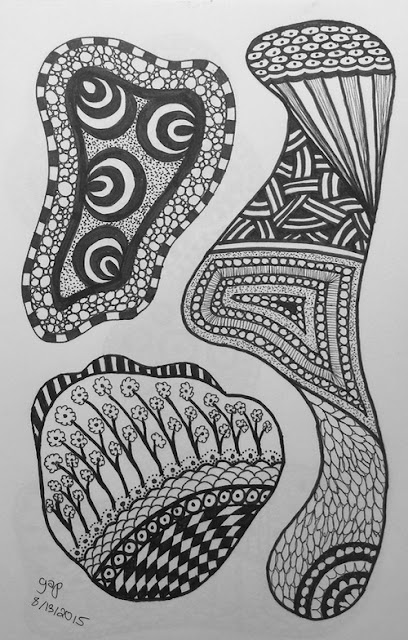 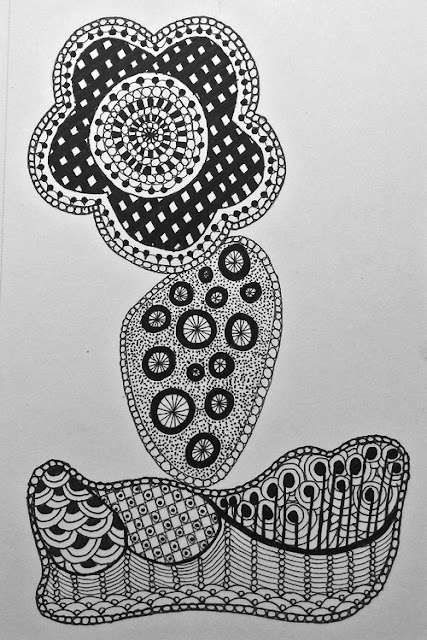 My whole thing with zentangles is that it takes me a long time.   I can't knock one out in, say, an hour or two.   Think more like three or four, even more if complicated.   But I do enjoy making them, especially when I am listening to a game.   Guess that sort of knocks out the meditative part, huh?

I managed to get the clothes situation organized...two folks in the apartment and one closet.   But, it is a big walk-in one so it's all good.

Tomorrow, I am tackling fall decorations.   The only downside is that I will have to pull out most of what is in the big hall closet to find the fall decoration boxes.   But have no fear, those I will find because, as I have said before, fall is my favorite time of year.

Thanks for checking things out here...
Have a great day tomorrow...
Talk to you tomorrow evening...