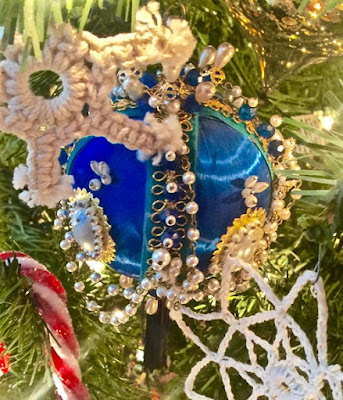 Christmas 2015 has come and gone.   Other than being sick, I had a wonderful Christmas.   And yes, my tree is still up and will be for several more days (weeks) maybe even a couple months.   I know, I know,  most folks take their tree down shortly after Christmas but I enjoy it more after Christmas.   That's one of the reasons that I have an artificial tree.   I keep it up.

So how was your Christmas?   I hope it was all that you wanted and more.   I also hope you didn't stress out too much.

But guess what?   Now is the time to think about next year.   No, not specifics but general observations.   What worked really well for you?   What could use some more tweaking?   What can you eliminate?

This would be a good time to sit down with a cuppa and make some short notes. I suggest that you put them on a calendar so you see them next year soon enough to be aware of those ideas before you begin planning for Christmas 2016.

For instance, I put up almost all of my decorations this year.   But many, I realize, I can easily part with.   I enjoyed them one more year and now I will donate them to someone else.   Many are going to family members, some to friends, but most to a thrift store where others will have an opportunity to enjoy them next year.

Mind you, not all.   I will still have more decorations than most folks.   And next year will be the same, I will just have fewer of those 'more' decorations.

On another point, I did a lot of baking this year.   But, as much of that baking went to family as gifts, I will probably do the same amount next year.  I don't anticipate much left after the New Year.   At most a few cookies which I will freeze in small packages so I can enjoy them throughout the rest of winter.

As usual, I need to get my packages out earlier next year.   I wasn't too bad this year...things got to everyone before Christmas but it would have been cheaper if I had sent them a couple weeks earlier.

One other thing I need to do is begin to plan what I will be making for each of the families.   A couple years ago, I thought about a crocheted village based on the one I made when the children were young but on a scaled down size.  I still place the original under my tree each year.  Here's part of it...

I did make a sample village but never got around to making enough sets.   Here it is... 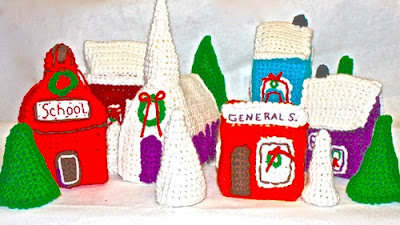 So, I think I will do some tweaking with some of the buildings and begin now so I can make enough sets for next year.

So, can you think of any ideas that you might want to incorporate in your plans for next Christmas? Be sure to make a note of them.

I'm still a bit under the weather, but doing better.   I think tomorrow I will get out to see some things. If I do, I will take pictures.

Thanks for stopping in...
Talk to you tomorrow...
Posted by Gretchen at 7:23 PM
Email ThisBlogThis!Share to TwitterShare to FacebookShare to Pinterest
Newer Post Older Post Home

Using dried plants/weeds is a cheap way to decorate for fall!