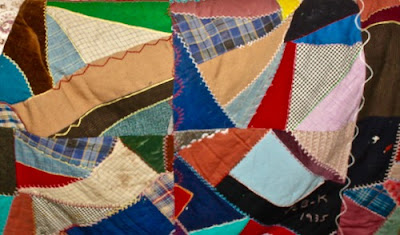 I was getting the refreshments ready for the group - mainly, a fruit platter, a variety of crackers and cheese plus a couple of different wines - fast and easy. I decided that it would probably be a good idea to have some coffee ready, just in case. And maybe some tea.

Since it was raining, meeting outside or on the porch was not a choice so I quickly spruced up the living room, making sure that there was a place for everyone to sit with plenty of room to put their quilting stuff. After checking everything, I sat down to look at my quilting projects with the aim of deciding which one I would work on this afternoon.

I used to live in a very large house but decided that a smaller place was more practical and less work. Now I have a large central area with a kitchen in one corner and a fireplace in the opposite corner. It's roomy and can accommodate several comfy chairs as well as a table for dining and a place for my studio. I like my somewhat new home. It suits me just fine.

Ida Rose had called and said she was bringing her quilt top and large hoop. She had already made the stems and appliqued them onto the quilt. She had also drawn the rest of the pattern on the quilt. We could each take turns working on the flowers and leaves. Doing it this way would make fast work of the quilt top.

“Come on in, Martha Kerine.” I said as I walked to the porch.

“You can keep your umbrella out here... and let me take your raincoat. I'll hang it out up to dry.”

“I was wondering if I would make it, the rain was coming down so fast that the wipers barely kept up.” Martha Kerine said as she was taking off her raincoat.

“Here comes...it looks like Ida Rose and Anna Mae are with Elsie Jean. I'll go out and help them in while you hold the door, Martha Kerine.” I said as I picked up the large golf umbrella and ran out to the car.

A few minutes later, the three were on the porch, shedding their raincoats and umbrellas.

“My goodness, I know we need the rain, but this downpour could cause some flooding.” Elsie Jean said as she hung up her raincoat.

“I'll do it Ida Rose.” I said as I grabbed the umbrella once more and ran out to help Wanda Kay.

A bit later, everyone was seated and drinking either hot coffee or tea trying to dry out and warm up from the heavy downpour. No one had taken out their quilting projects.

“So, Ida Rose, how did the quilt committee meeting go?” Martha Kerine asked.

“Well, I think we made some good progress. They liked our ideas of letting folks take orphan blocks and learn how to quilt and possible finish them. They also thought it would be nice to have both adult and children stations so that the younger folk could give quilting a try. And, as well as orphan blocks, we could cut several squares out of a variety of fabrics and let folks create either a four or nine-patch block.

“Another idea came up to take a large whole cloth quilt, applique on letters with the name of our guild and the quilt show in the center. Then have everyone who attends, write their name around the appliqued portion. We could later stitch over the names with embroidery floss. Then we could finish up the quilt with a nice border. It would be different.” Ida Rose offered.

“Those are great ideas, Ida Rose but what about everything else?” Elsie Jean asked.

“Well, there was another great idea but the committee members weren't sure if the rest of the guild would object.” Ida Rose responded.

Ida Rose, sat for a few seconds, thinking. The rest of us all looked at her wondering...

Finally, she said, “You know that there are other things going on around the time of our quilt show. The Library Book Fair is held around that time. Then there's the annual Barbeque Contest between the five churches in the area. The Community band has concerts in the park weekly for that month. And...”

“Is the committee suggesting that everything be held on the same day in the park?” Wanda Kay asked with a bit of panic indicated by her rising voice.

“That's about the size of it.” Ida Rose answered quietly.

We all sat there, thinking about the possible disasters. I could envision barbeque sauce all over our quilts.

“Well, that would be one for the books.” Martha Kerine said. “But, I think it just may be the answer to our problem. Think about it. We would get tons more visitors to the show. And we could ask for donations to keep the guild going.

“You know, Martha Kerine is right.” Anna Mae added. “I remember several years ago attending a quilt show that was held at the same time as the community fair. The show was in a separate building right next to the fair so it was a bit different. There was no entrance fee, only donations, but I remember talking to one of the guild members and they said that the donations were excellent and the crowds seeing all the quilts were huge.”

“Well,” Ida Rose spoke up, “there will have to be a lot of coordination involved with the different groups. The one positive note was that on the quilt committee we had someone involved with each of the other activities so they were going back to their particular groups to see if they were interested.”

“And, you know, with the latest addition to the park,” I added, “There's enough room for all the activities with lots of space left over. We would have to figure out who would use what facilities like the covered picnic areas. But I think that hanging the quilts like they do at Sister's or even on large canopy tent structures would show off our quilts beautifully...as long as we don't have weather like today!”

Everyone laughed as I got up to collect the coffee and tea cups.

“Time to get some quilting done and I have my large hoop ready for someone to applique flowers or leaves on Jenny's quilt. The pattern is already on and I have all the flowers and leaves cut out and pressed. Who's first” Ida Rose asked.

And with that everyone was busy with their quilt projects

“Have you given the quilt to Walter yet, Martha Kerine?” Anna Mae asked.

“Yes, and he loved it. As a matter of fact, he and his wife Effie were over for supper last Sunday when I gave them the quilt. There were lots of laughs all around as Walter and Henry remembered some of the clothes that I used for the blocks. It turned out to be a trip down memory lane.

“Did you know that there was a chicken coop attached to the old barn at our place? I didn't. Henry and Walter were telling Effie and me about how they would dare each other to jump off the coop. Then when they both accomplished that, they used to dare each other to see who could jump the furtherest! And then,,” Martha Kerine stopped and began to laugh.

“Well, then they decided who could...well, you know...relieve themselves the furthest while standing on the coop.”

“Yes, but it gets even better, or worse.” Martha Kerine replied. “The two were having a contest when their mom walked around the corner to check the coop for eggs. It scared the boys so much that they couldn't stop and wound up spraying each other!” By this time Martha Kerine was laughing so hard she had a time catching her breath.

“Wow. That would have been hysterical to see!” Elsie Jean said. “What happened?”

“Well, to hear them tell it, they were severely punished. What happened is that their mom went and got the hose and turned it on spraying both of them with very, very cold water. Then they had to go in and take a shower. That was then end of their 'so-called' contests.” Martha Kerine finished.

“Boys will be boys.” I said. “Let's hope they're still not daring each other...”

We all sat quietly, smiling at the story and working on our projects. Wanda Kay had finished a turn at Jenny's quilt top and turned over the hoop to Anna Mae.

“So how did the postcard swap go, Anna Mae?” Wanda Kay asked.

“It was fun. I've been checking Pinterest to see the other postcards. Everyone was asked to take a picture of the postcard they received and post it. Mine was sent to someone in Montana and they loved it. I received one from Alabama and it was full of azalea flowers. Really stunning. You know, we should suggest doing something like that at the guild...” Anna Mae paused, “...but after the quilt show.”

“That would be a nice idea, Anna Mae.” Elsie Jean answered. “But maybe not postcard art as we all live in the same area. I like the idea of doing something like that, though.”

“How about swapping mini quilts? Or, mug rugs?” Anna Mae suggested. “I think the idea is to make something not too big and give it away. It would be a nice way to get to know some of the new members of the guild. We could pair them with the older members and then suggest that they swap ideas about colors and types of fabric each likes.”

“That is a good idea, Anna Mae.” I said. “It really would be a nice way to get to know some of the new faces. There are a lot of younger folks at the meeting and that's good but I don't know anything about them. Not that I want to know their life story but it would be nice to know what attracts them to a bunch of us old geezers...”

“Whose next on Jenny's quilt?” Anna Mae asked.

“My turn,” Elsie Jean answered as she got up to get the hoop. “Wow, this is really looking nice. I bet Jenny will love it, Ida Rose.”

While everyone was busy, I got up and went to the get the refreshments ready. I found a nice bright summer tablecloth and placed a bouquet of summer flowers along with the food. There were enough chairs around the table for everyone to sit and munch.

“The refreshments are ready when you are.” I announced and watched as folks began laying their quilt projects down. “I hope this is alright. Food is definitely not my strong point!

“I guess we all forgot to BYOL.” Martha Kerine teased. “This is just fine, Gertie. And let's face it...none of us will starve. As a matter of fact, we could all do with a little less.”

And with that everyone found a chair at the table to enjoy the refreshments talk with one another.

After eating and, of course, talking or maybe a bit of gossiping, everyone returned to their quilting for a while longer. As folks began packing things up Anna Mae reminded everyone that the next meeting was at her place.

And then they all made a mad dash to their respective cars as the rain was still pouring down...