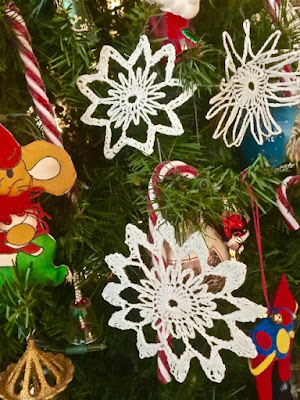 I remember seeing them in my grandma's home but I can't remember if I saw it in my home as a child growing up. Now it resides as a decoration in my home. It's old and very folksy and I hope that someday it will go to one of my children or grandchildren's home. Until then it will be a permanent fixture at Christmas time in my home.

The other picture is of snowflakes which have been on my Christmas Tree for years and years. These were made by my husband who enjoyed knitting and crocheting - especially when he gave up smoking!!

While I was reorganizing my studio this past week I found several old magazines and pamphlets like this McCall Sewing Corps, circa 1943...older than even I am... 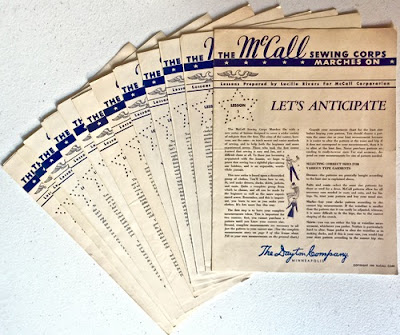 I am in the process of limiting my wardrobe probably influenced by Project 333. I don't know about you but I have/had lots of clothes but many of which I did not feel especially good in.  I have decided that I really want fewer clothes but all of them have to be ones that I enjoy wearing.

I also shop in thrift stores. Last year I scored a Cashmere suit jacket in perfect shape for under ten dollars.  I had a couple pairs of dress pants but now that I have lost weight they are way too large. When I found the MeCall's pamphlets I was happy to find one that was about altering pants. So I tried it with one of my dress pants and guess what...it worked!!! 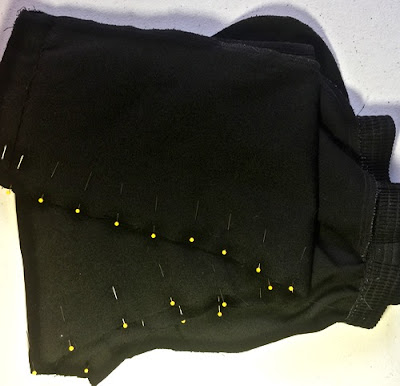 I have a dark grey pair of pants that I will now alter and together with the suit jacket, I will have a couple nice looks for dressing up.

One of the new features for 2017 is a fictional storyline about a group of six older quilters and their everyday, ordinary adventures. There will be story updates twice a month, once after their small group meetings and once after the large guild meeting.

You will meet Gert and most of the meetings will be from her perspective. Then there's Martha Kerine who loves to bake and has a quilt frame hanging from her living room ceiling. Anna Mae is the oldest member and also the busiest.  Elsie Jean is full of enthusiasm and very bubbly, not something one would associate with a bookkeeper. Ida Rose is probably the best quilter who also loves embroidery. And our youngest member is Wanda Kay who loves gardening so much that she raises enough vegetables to feed a small town!

So be sure to check in on our little group.  The first meeting will be next week!

That's all for today...
Thanks for dropping by...
Talk to you tomorrow...