INCHIE CHALLENGE 9 and HOW ARE YOU SPENDING YOUR FRIDAY?

Living in NYC for several years, and next to a fire department in Maryland, I am used to noise.   But last night takes the cake...

Around 2am I was awakened by what I thought was a train, but it was getting closer and closer and CLOSER - no it was not a tornado - but I was really getting concerned.   There are no tracks close enough to hear the train that loud.   Then, when I felt the floor slightly shake,  I decided it was time to get up and investigate.

I didn't see much through the trees with the exception of lots and lots of white and yellow lights - the type of illumination night roadcrews use.   It was then that I realized they must be working on the road and decided to give everyone a wake-up call as I saw lights go on in the houses surrounding mine!!!

Of course, after that excitement, going back to sleep was near to impossible, so I read until the rain began and finally fell asleep.

Well, the rain has continued all day.   So, I just decided it was perfect reading weather and after lunch, that's what I did...read.   In fact, I finished Crunch Time late this afternoon.   If you like mysteries, especially those with great recipes, check it out.   It's really good.

That's how I spent my Friday...how did you spend yours?

I finally finished getting the swap ready for mailing.   I wanted to make a box to put my inchie in before sending... 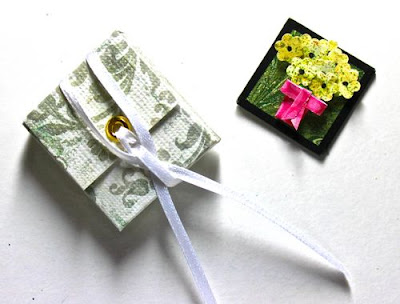 And here's today's inchie.   It is a bit more complicated, but still easy to do.   I call it Fireworks Closeup... 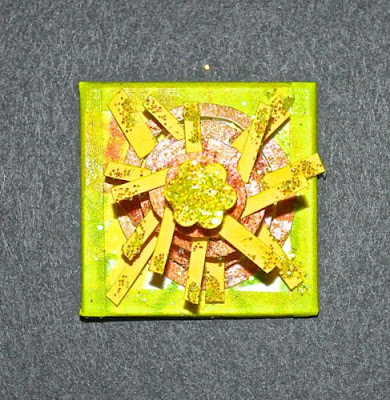 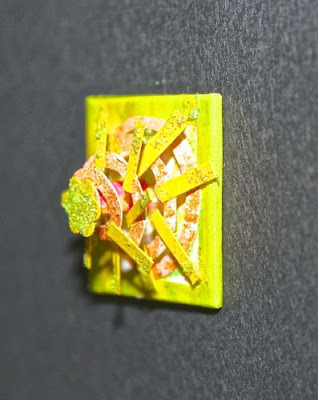 First, I glued a light piece of decorated paper to the base and finished the edges with paper tape that is a yellow/green color.

Next, out of cardstock decorated paper, I cut a circle that fit inside the paper tape edging.   Then I cut a continuous spiral out of the circle.   To keep the spiral elevated, I rolled up a tiny piece of the cardstock and secured with glue.   I then glued it to the base.

After the spiral was dry, I cut several thin pieces of the same cardstock and attached them to the spiral with glue after applying glitter to the ends.   I also used a flower punch to make a flower to add to the top of the spiral which I atached with glue and then added glitter.  As I said a bit more complicated, but not difficult.

Any plans for the weekend?  There is always preseason football if you're looking for something to watch!!!   I've heard that this is a busy weekend for parents getting things for school-aged children.   Actually I am surprised at how many school systems have already begun!!!

Thanks for checking out my blog today,
See you tomorrow...yes I will be posting this weekend again...Inchie Challenge, remember?
Posted by Gretchen at 4:34 PM
Email ThisBlogThis!Share to TwitterShare to FacebookShare to Pinterest
Newer Post Older Post Home