#ARTISTSFORLOVE, SLOW DOWN AND BREATH, THANKFULNESS 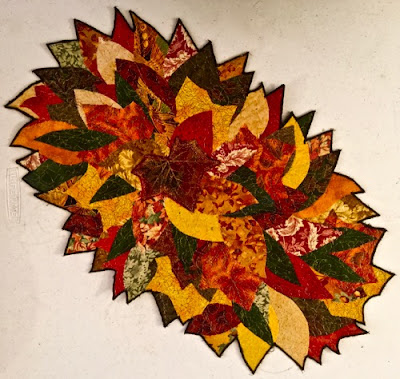 I made this for my table many years ago and
it's still as colorful as the day I finished it.


#ARTISTSFORLOVE
"Silence in not an option.  Only love is,
and the widely-spread expression of it."
written in a post by Orly here.

"I have an impenetrable - and perhaps naive - belief
that we should all support and lift each other up.'
wrote Seth Apter in a post here.

"A friend recently said what my heart knows to be true:
'Although we may hold different political beliefs,
we can still hold one another.'"
wrote Kelly Rae Roberts in her blog Let Art Out,
Let Love In post here.

What do these three artists (and many more) have in common - #ARTISTSFORLOVE. A movement begun by artists. A place where artists of all kinds can espress their concern, their support, their angst, but especially their love through their creations.

Many - most - of us have a need to express our shock, our concern over the recent turn of events. One way to make sure that our voices of justice and love, of compassion and care, of support and encouragement are heard is to stay engaged in our community.  Artists For Love is one place to share our voices.

Check it out, and when moved to do so, participate.  Make your voice known.

SLOWING DOWN TO BREATH
Okay, I live in New York City and one thing we are well known for is walking (and talking) fast. Why, most working folks change into running shoes when they leave their offices.  And if you slow down, watch out, you may get run over

BUT, today as I was out walking to run some errands and to enjoy nature (Yes, folks, there is nature in NYC!!! Believe it or not!!!) I realized that I was fully into walking my normal tempo...make that fast.  Well, as fast as someone my age can walk (It's fast, folks!).

I stopped.  Thankfully, no one was behind me.  It took a second for me to realize that I had stopped and then I wondered why.  It hit me all of a sudden.  Look at that array of beautiful leaves on the sidewalk... 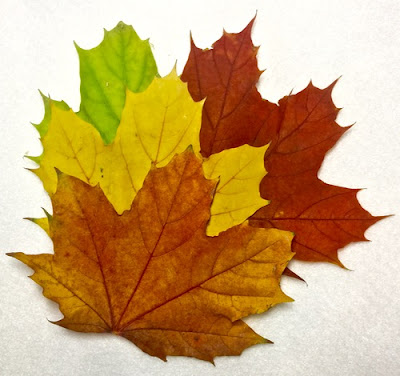 Yep, these leaves...well there were tons more...but I picked up these four to bring home and admire (and take a picture of for my blog!).

I looked around and realized that the school children were being let out and running to their parents, and that two women were out with their strollers. A cat was sitting on a porch railing. A postman was delivering mail.

The sun was bright.  There were only a few clouds in the sky. There were sounds of the city like cars, a distant emergency vehicle and planes landing but there was also the wind rustling the fall leaves and a bird singing (Maybe that's why the cat was on the railing?)

I took a very deep breath and thought to myself...wow, all this activity and I was missing every bit of it. I decided then and there that yes there would be times when I walked fast (like trying to get to the subway or catch a bus) but more often than not, I was going to walk with presence.  Walk taking the time to enjoy those little moments that so often go unnoticed. And I invite you to do the same, when you can. Be present to each moment in your life and treat them as the gift they are.

THANKFULNESS
We are now past the halfway point in November.  Thanksgiving is a week from tomorrow. (Do you know where your menu plans are???)  Last year I went on Wednesday evening to watch the balloons being blown up. Never again.  It used to be fun, but the whole world has now decided to show up. So I will be heading out for the Parade this year.

That's it for today. I see the sun has crept away unbeknown to me once again and it is pitch black outside.  Can't wait for the winter solstice.

Thanks for dropping by...
Talk to you tomorrow...