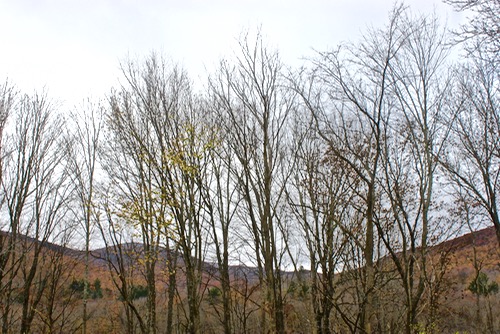 Still no snow...but there is a promise of snow at the end of the week.  Temperatures, though, have been in the low 20's and high teens.  If we have to have the cold weather, couldn't we please have the snow to play in?

So the workshop on Saturday went well.  Folks loved the wonky weaving where you cut irregular lines on two right side up pieces of fabric and then weave them together.

They were also surprised at how changing the pattern of the weaving strips can change the results. 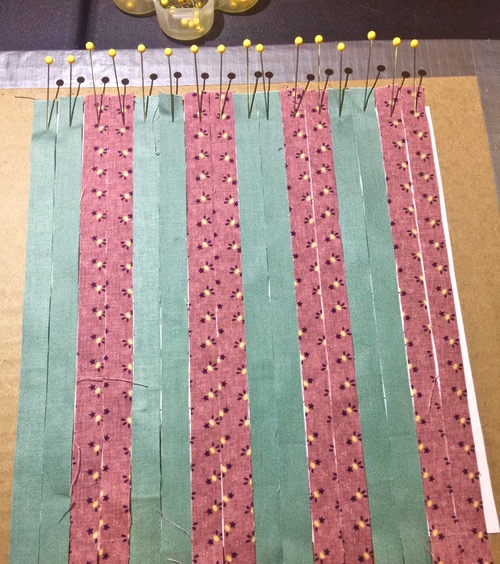 This pattern was two strips of one color alternating with two strips of another color.  The weave was a simple basket weave. Alternating strip by strip but keeping the same fabric color pattern.  And that produced a houndstooth pattern. 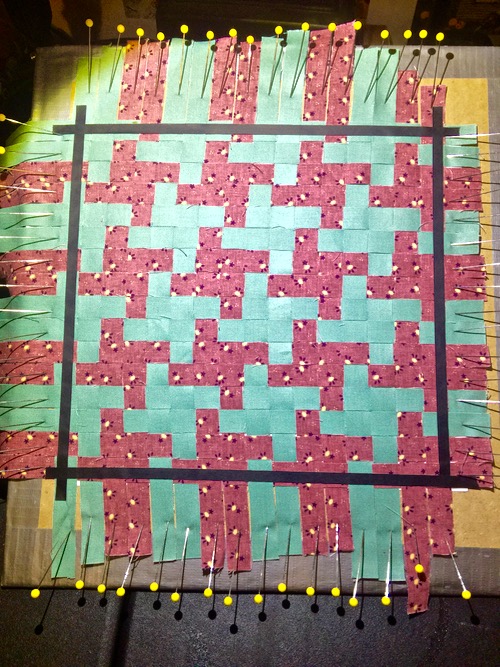 I encouraged them to take the same strips and try a different color pattern and/or a different weaving pattern to see what evolved.  One question was how to keep the weaving together.  I suggested placing a piece of heat activated adhesive piece like Steam-A-Seam underneath before weaving.  Then while still pinned, touch the weaving lightly with the iron to tack it down, then take out the pins and iron as directed.

The black tape on the photo is a low tack tape similar to painter's tape.  I have been able to tape the edges as shown above, take out the pins and move it to the sewing machine to stitch down. But I have to say that using something underneath like Steam-A-Seam is much easier.

Did you know that you can iron pieces of plastic bags together?  You need something like parchment paper above and below the plastic bags so that the plastic doesn't get on the iron.  I saw one YouTube video showing all the different uses.

For instance, cut off the handles (save for later), cut open the bags. Layer them maybe five or six deep and iron them.  Make two, cut to equal size, iron the edges on three sides only making a bag.  Then stack the handles up and iron them together.  Attach to the inside of the bag to make a handle.  You can even sew up the sides where you attach the handle for added strength.

I haven't tried it but plan to this week.  I'll let you know how it works out.

Hope your weekend was great.  The football games were pretty much one-sided until the last one between the Saints and the Eagles.  That one was great to watch...

Stay warm...
Talk with you tomorrow...