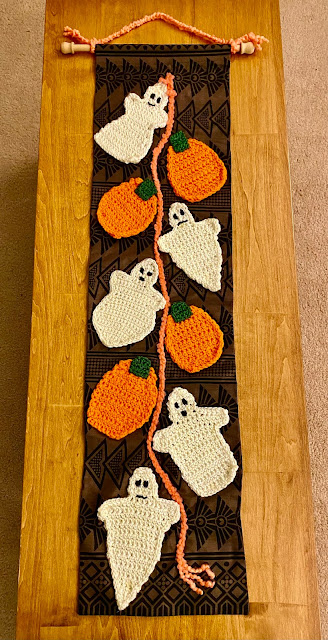 Remember the crocheted ghosts that I told you about yesterday, well, I finished five of them as well as four pumpkins.  I decided to make a wall hanging rather than a garland.  Mostly because they didn't hang as well as I wanted.

So after crocheting and embroidering the ghosts and pumpkins, I braided a thick bumpy yarn.  I had some dark fabric to use as the background from which I cut two pieces, sewed them together leaving the top open.  After turning and ironing, I pinned the crochets items down and then placed the braided yarn down between.

I used black thread on the bottom and clear thread on the top.  I first stitched down the braided yarn with a long, straight stitch down the middle.  It did stretch out as I was sewing so I was able to cut off a couple inches and 'fray' the end.

After stitching down the braided yarn, I did take the time to stretch out any areas that bunched up and iron it well on the back side.  I did not want to take the chance of melting the invisible thread on the top.

Next, I machine tacked down the ghosts and pumpkins by stitching eight stitches and four back stitches on four different areas of each crocheted item starting at the top, one place on each side and one on the bottom.  I did not cut the thread after each area stitched, I simply lifted the presser foot with needle up and moving to the next closest area.

When it was all done, I went back and clipped all the thread left by moving to the next stitch area on both the front and back.

Finally, I folded under the top open edge and then folded again so the raw edge was not visible and stitched straight across leaving area for a wooden dowel to slip through.  To hang, I braided another length of the orange yarn and attached it to each end of the dowel.

All in all, I like the way it turned out.  And I was able to watch Captain Kirk fly up and come back to earth.  What he had to say about the experience afterwards was really inspiring.   I know that he isn't everyone's cup of tea but he is very active in protecting our climate.  And his was wish that everyone could see the earth from space so they would see how beautiful but also vulnerable the earth was.