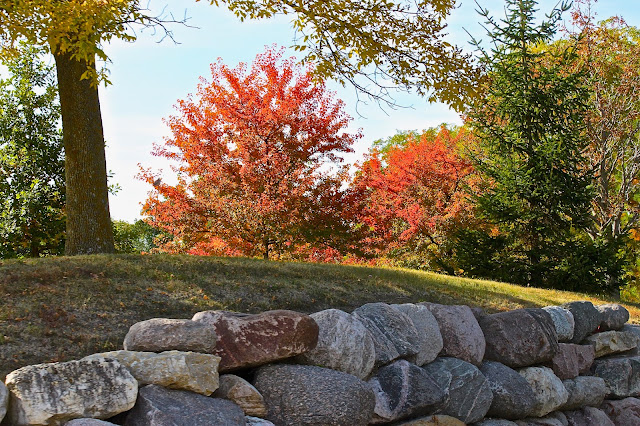 I took a drive up to the Minnewaska State Park north of here and west of New Paltz, New York.  I went down narrow country roads and enjoyed the beautiful scenery including some spectacular color.  On the way home, I decided to stop and pick up a French Silk Pie.  Well, that was the wrong thing to do.

Problem was that as I was turning into the restaurant, I was forced to make a tight turn and wound up on the curb.  Not a problem with the truck...until you figure in that there was a boulder there!  I wound up tearing off my most of my running board and a small piece of rust on the back corner of the cab...not the door.

Not enough cost to use my insurance as I have a thousand dollars deductible.  Just frustrating.  I was thinking that this was the third 'accident' in my life.  Shortly after getting married, I backed out of a parking spot where we lived and within a couple minutes another car pulled out and hit me.  Of course, the driver was a very loud, self important man and accused me on not watching.  No real damage was done, but it was frustrating...but that's the way women were treated back in the late 60's.

My next accident with Lady J happened after my husband died and I was traveling around the country with Duchess.  I backed Lady J up - right into a tree.  The backup warning didn't sound because the tree was not in it's path.  Only lost a covering to the light.

And now this latest little experience.  Do you know what my first thought was?  Folks are going to ignore what happened and think that this little old lady can't drive!  Wow...what a thought.  Guess I am conditioned to be concerned about driving and age.

Oh well, I will get it looked at and fixed.  The running board, although half missing is still useable.  I do want to get the rusted area treated though.  As a matter of fact, my son thought it was good thing because now I won't put off taking care of that small (1"square) rusted area.

Life goes on.  I just heard from one of my son's whose boy was driving my old Explorer, Lady J and had a problem.  They just had the tires replaced yesterday...and when he was driving back to Park City from Salt Lake, things didn't feel right.  He pulled over and looked...all the lug nuts on one tire were gone and the tire was in terrible shape.  The lug nuts were there yesterday...but not today.  The place that replaced the tires promised to take care of everything including the tow!

Not a good couple of days for vehicles.   Come to think of it, not a good month for vehicles in this household.  We added it up and between the three of us and our three vehicles, we spent nine and a half thousand dollars on vehicle maintenance!  Wow!

Being 'present' is our 'gift' to ourself

Find a craft that helps you be mindful like doodling or sewing and gather the supplies needed to spend time each day on that activity.