Work to Live or Live to Work... 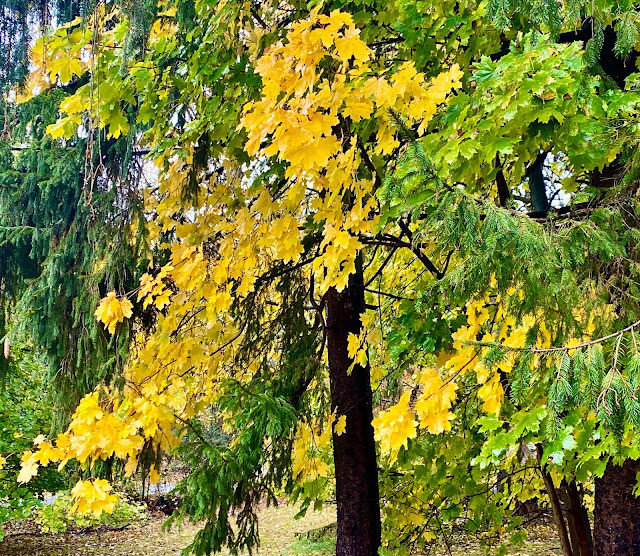 Wow! It was in the mid 70's today...and sunny!  Although there is a possibility of rain later this evening.  I think the forecast said that this would be the highest temperature until next spring.    I have to agree that it was unseasonably hot in the sun.

So I made meatballs, squash (winter), baked potatoes and gravy for this evening meal.  I made enough meatballs to freeze several.  Not only were there a lot, but they were big.

I am working on more decoration ideas for Christmas.  I finally was able to crochet (Yes, I know that I put the yarn away in favor of felt, but it kept calling me!) a plain, flat Christmas tree that I was satisfied with.  I am going to add some sequins and beads to it along with white garland.  It's simple enough to make in an hour or so.

I was looking at Christmas Cards today but realized that I don't really need a whole box of them.  I remember when I sent out tons of cards, but lately I only send out a few.  Is that a good thing or a bad one?  Does that mean that I have fewer folks to send to?  Guess that's part of the problem, but then I also send a lot of emails rather than cards.  And folks just don't seem to send cards anymore.  Boy have times changed.

They are predicting a record year for sales this Christmas.  There is inflation (but the gas prices went down at my gas station!) and a ton of available jobs...but no one is lining up to fill them.  Very interesting.  I wonder why.

Could it be that the pandemic with all it's shutdowns have had the added effect of people figuring out that for the most part they work to live rather than live to work?  Interesting question.  What do you think?

I have to travel to the city tomorrow so I may not get back in time to blog.  I hope I do but if not, I will talk with you Monday...

Using dried plants/weeds is a cheap way to decorate for fall!