QUILTS
I did spend Saturday in Manhattan, attending the Empire Quilt Guild Meeting.   I took a couple pictures of quilts to share.  Actually, I took a lot, but most of them did not turn out well enough to share... 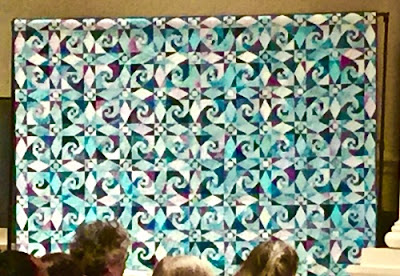 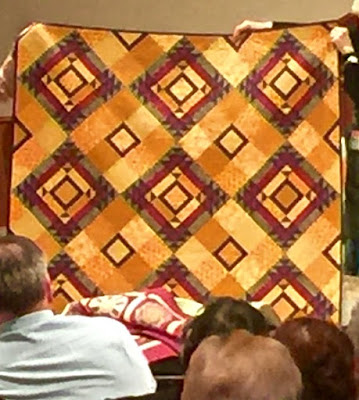 It was a fun meeting.   And I managed not to purchase anything...well, actually, that's not true.   I did purchase old five magazines for a dollar.   Unfortunately, they were heavy magazines.   Why is that important?

WALKING
Well, getting from Brooklyn to the stop on 28th Street in Manhattan on the R Train is easy.   However, getting back?   The R which is generally a local train turned out to be an express due to work on the local train track.   So I wound up walking down to Union Square.   There was still no R Train going to Brooklyn but I took the Q Train to Canal Street and picked up the R Train.

In a way, it was a good thing because those extra miles meant that I not only made my goal of 12 miles last week, I walked 15 miles.   I also climbed 27 flights of stairs...gotta love those subway stairs!!!

So tomorrow my plan is to visit the American Folk Museum up by Lincoln Center...and if possible, I will take as many pictures as possible.

MINIMALIST ARTICLE
While reading 'Becoming Minimalist' I ran across a great article from the Huffington Post called 'Declutter Your Fantasy Self' by Francine Jay.  It was an interesting take on decluttering...one that I think applies to many folk including me.

I don't know about you, but I do purchase craft supplies thinking that I will try a new craft when...I have more time, I have a better studio, etc.   There are other examples in the article which also hit home like having formal clothes for a jean's and t-shirt lifestyle.   Give it a read, you may find it an eye-opener for yourself like I found for myself.

There's a new Journal Prompt posted.   The first week, we looked back.   The second week, we appreciated where we were at right now.   This week, we're beginning to look forward.

Thanks for dropping by today...
Talk to you later...