WHAT DOES SANTA REPRESENT FOR YOU? 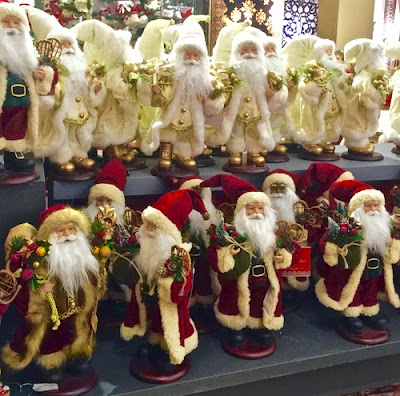 What does Santa represent for you? We all know what the commercialization of Santa means for the corporate world. Goodwill and lots of sales.

But for those of you who recognize Santa as part of your Holiday Season both religious and secular, what does Santa represent? Does Santa represent a means to encourage children to behave? How about representing a way to find out what children want as they sit on 'Santa's' lap?

The actual person behind the story of Santa is St. Nicholas. To sum up his story, Nicholas was born in the Third Century to very rich parents. His parents raised Nicholas to be a devout Christian. Unfortunately, they died in an epidemic while he was young.

Nicholas took what he learned to heart and gave his money to the poor, the needy and the sick. He became the Bishop of Myra while still young and throughout his life he gained a reputation of being very generous and helping those in need, especially children.

The idea of Santa is now embedded in our secular culture and the nice thing about that is that Santa does represent giving to others.

There are many forms of giving. Just as Nicholas, we give gifts to our family and friends, to those we do not know, to the homeless, to the sick, to those in jail, to the lonely, to the forgotten, to the 'others' of society.

Our gifts can be things such as toys, food, clothing and money.

But remember, our gifts can be something even more special such as time spent with lonely folks, a smile to a harried clerk, standing up for someone who is wronged because of the color of their skin or whom they worship, attending rallies and events to help bring about justice for everyone, taking an active role in politics to work for healing and peace in our nation and world, etc., etc., etc.

There's much to do, especially right now, but if we can take a cue from Santa and find our special gifts which we can share with others...well, then we can get on with the healing of our nation and goodwill towards all.

Thanks for visiting...
Talk to you tomorrow...