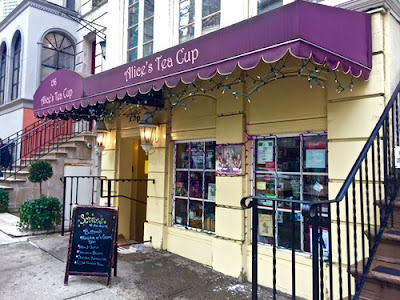 I had an eye doctor's appointment this morning in midtown Manhattan. (He agreed that I need cataract surgery.) Every time I visit him I pass by this tea house but with no time to stop in and check it out. Well, today I took the time to have some tea and scones. 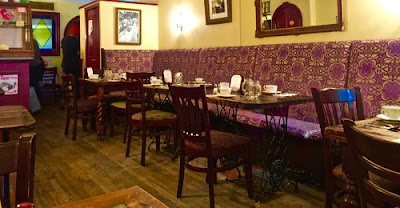 It's cute and small. This is the extent of the main floor but I believe that there is an upper floor. It functions more like a small restaurant than a tea house but it does off 'teas'. I simply selected a small pot of tea and two scones with the accompanied jam, butter and clotted cream.

The tea was absolutely heavenly...White Champagne Raspberry. It's one of the best teas I have ever tasted. The scones were good and very, very large. I could only eat less then half of each, a pumpkin with caramel glaze and a ham and cheese.

They also offer breakfast and lunch. Next time I am in the area I want to try one of their soup and sandwich specials.

A couple of notes first off. I will probably be including more comments on the political situation in my blog, but I will label them for those of you who may chose to not read them. (However, I really do hope that you consider becoming involved politically in your area.)

Second, I was born in Minnesota and really consider it my home so I feel I can talk about Minnesota Nice.

But, I am actually responding to some Unitarian Universalist Church (Society) podcasts of last Sunday's message, a couple of them are from Minnesota.

But 'Minnesota Nice' just might not work anymore...at least the part of raising controversial issues. Or talking with folks on the other side of the political spectrum. We need to grow a...spine...and stand up to fake news, alternative facts and downright lies. Not to mention the comments and actions coming from the executive level which punishes any dissenters.

Conservatives have won (although I maintain that with the Russian involvement, the interstate checklist and the actions around Hillary's e-mails this election was stolen) but 'Minnesota Nice' which was at one time the way our congress operated is long gone for both the congressional and executive branches.

And we now need to stand up and confront them, in a civil manner yes. But also with the conviction that comes with knowing that we are standing up for nothing less than our democracy. Demonstrations, contacting our legislatures via e-mail, telephone or post cards, getting involved at the local level including becoming a candidate, posting on facebook and/or twitter, supporting those elected officials who are holding the line, and VOTE are all needed.

And we need to maintain that type of involvement, not just for a day, or a week, or even a month. We need to make it a part of our daily life. Michael Moore asked that we include a call to one of our elected officials every day. Sounds good to me. Mailing postcards regularly also works. Let your elected officials know your concerns. Tell them you have their back when they stand up but also let them know when you are disappointed.

Above all, keep the faith...
Well, that's enough for today...
Thanks for stopping by...
Talk to you tomorrow...