GETTING READY FOR HARPER... 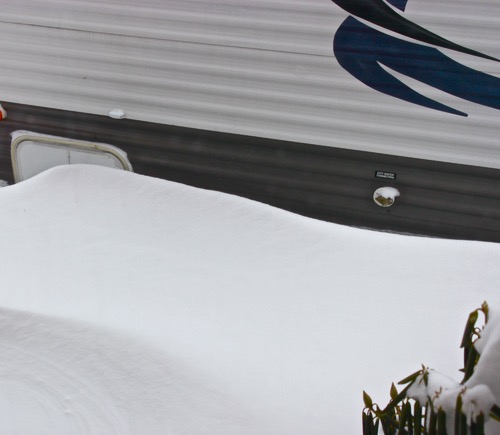 That's Duchess in the photo above.  This was taken in Maine when we had a snow storm that dumped over three feet of snow.  I could only see the top of Lady J.  With ShowWhite, I will be able to see much more of her.

The storm track is not definite for this weekend but we could get over two feet of snow, then rain and finally ice.  As I was finishing up my shopping today in anticipation of the storm, most folks think we will get a large dump of snow and then ice on top.

I filled up SnowWhite, stopped at the hardware store to talk about the heater.  Anything larger than a 5 gallon propane tank in the house was not safe.  And since 5 gallon propane tanks are hard to come by and more expensive than a 10 gallon, I stuck with 1 pound small propane tanks.  I also purchased a new CO monitor battery operated...just in case!

If we lose electricity, we lose heat, lights and water. So I bought a couple large pallets of water.  Friday evening I will fill up bathtubs for flushing and large containers in the kitchen for washing.

We have a grill and fire pit, plenty of wood and charcoal so we will be able to heat up or cook food.

Tomorrow I plan on making a couple loaves of bread, a cake (have to have sweets to keep our spirits up), some soup and using the ham and beef leftovers, some spreads for sandwiches.

After all this, my January no spending plan is shot to heck.  February won't be much better...maybe March?

Unfortunately, one son came home from work this morning sicker than a...well...just really sick.  I told him this was going beyond the pale to get out of shoveling snow to which he weakly laughed on his way to bed.  (And I even purchased another shovel so both boys have one!!!)

So, I did spend some more time on the felt pieces.  I attached all the small pieces to each base... 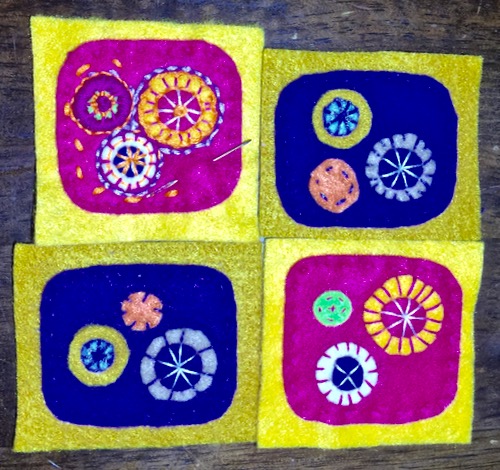 And then I began playing with one piece... 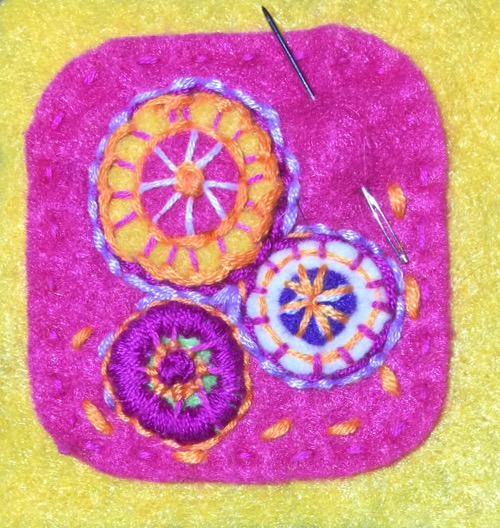 Once I cover the entire piece with embroidery thread I am going to sprinkle in some bead work.  I have to say that this is very relaxing.  Good thing, though, that the back is not visible because it is one glorious mess!!!

Well, that's it for tonight.  If you are in the path of the storm, be safe and be prepared, please.

Thanks for visiting...
Talk with you tomorrow...