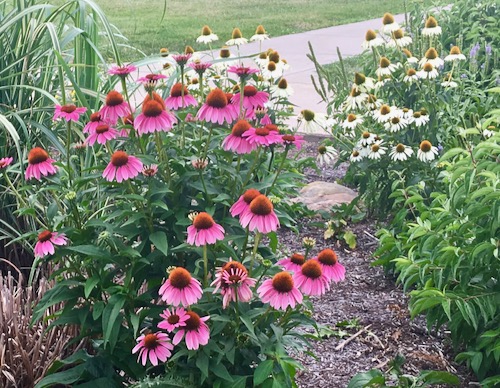 The sad thing is that the House Managers proved their claims and even many (and growing) well known Republican Senators agreed but they choose to not remove the president for a variety of reasons:  The election is soon; It will increase the culture war; It was wrong but not impeachable; It would invalidate the past election.

Pelosi did not whip her votes.  McConnell not only whipped them but both he and the president threatened the Republican Senators...all I can say is that I hope the Democrats and Independents are ready for a fight that will include other nations weighing in the the president's side.  It will definitely be an unfair voting situation.

But the trend is against the Republican, or should I say, the Trump Party.  If this election does not work out, the next will...I only hope there is a democracy left to fight for!

And if the Impeachment Trial is not enough, the Iowa Caucus is tonight.  What a day!

I picked up another 60 bolts of donated fabric this weekend.  And from the boxes of scraps, I managed to cut another 41 fat quarters for the guild...very interesting and valuable scraps!  One box, though really was scraps that we could not use so it went to another venue.

It was quite warm today.  Just put the garbage out and my sweatshirt and jogging pants were warm enough.  The sun is still shining bringing lots of wonderful light into my studio.  Hopefully, I will be able to finish up the taking care of all the donations and get back to actually creating myself.

Did you watch the Superbowl?  I was disappointed with the commercials but the game was great and I was happy that KC won.  Their coach has won more games than any other coach but had not won a Superbowl...well, now he has his ring and I am happy for him.

Maybe there is hope for my team - the Vikings...can we get Bud Grant and Tarkenton back!!!  Think that dates me?  I remember watching Quarterback Y.A.Tittle with my dad!!!

Well, with that string of memory pearls, I will finish...
Talk with you tomorrow...