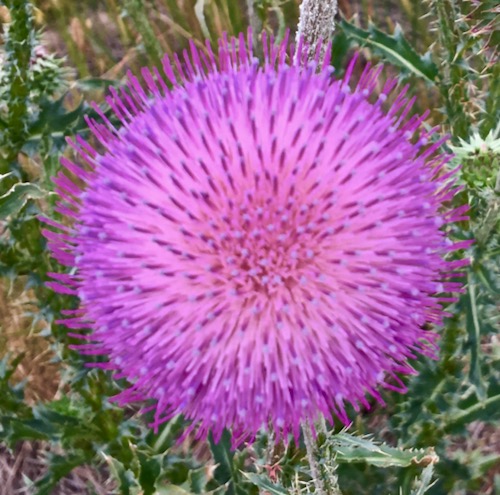 This beautiful flower is a thistle!!!  Don't like thistles but the flowers are gorgeous.

So I did get outside today and trimmed the entire yard as well as trimmed up the front hedge into a more boxlike shape.  There were short, light, rain showers but not enough to stop the work.  I was so tired after all the trimming that I decided not to try and plant the flowers.  Tomorrow, between the rain storms forecasted, I want to get at least one bed planted.

So, what in the world was the President thinking of with that proclamation about invoking the insurrection clause and putting military on the streets of our nation.

Let me tell you, the military has plans to attack and respond to any nation in the world.  They do not have plans to attack their own citizens.  Especially those who are peacefully protesting what is happening to our black community.

And then he visited two different religious sites without letting either of them know before hand all for photo--ops.  And in order to visit the Episcopal Church, he had Lafayette Square Park which was full of peaceful protesters cleared out with tear gas, pepper bullets and police on horses.

Our want-to-be dictator president is about to destroy all of our norms and institutions and I can only imagine the backlash that will happen.

Going to be a rough ride folks, hang on, but we will be better in the end!!!