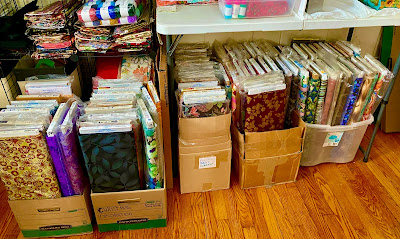 So you are probably wondering what this photo is all about.  Well, it's what's left of the fabric bolts donated to the guild that I hauled in my truck last year.  Other folks hauled bolts home also.

There were 91 bolts.  We sent out information about the fabric to our members and boy...did they respond.  I am down to about 79 or 80 bolts and the ones that are left are about half the size that they were.

Members didn't just purchase one or two yards, they purchased five and ten yards!  Can't blame them tho, we ask for a $4 donation per yard on fabric that normally sells for $12 or $13 per yard.

So tomorrow I will be packing these bolts into my truck along with all the orders I have filled and bringing them to our donation chair who now has enough room to take them...she also filled a ton of fabric requests.

I have to admit that this turned out much better than I thought it would.

So did you see the impeachment trial today?  It was very hard to watch.  The House Managers laid out what happened timeline wise in devastating videos, security camera footage and tweets.  As I said, it was hard to watch and even harder to grasp the reality of what really happened.

The little dust-up that Republican Mike Lee tried at the end backfired.  He said he didn't say those words...what words?..something to the effect that when the president called Tubberville, he wound up calling Mike Lee.  And Mike Lee simply said something like 'I'm not Bo' and handed the phone to Bo Tubberville.

Mike Lee wanted the Senate to vote on it trying to basically change the subject from the insurrection to the house managers lying.  The House Managers simply said, we'll take that statement out...it's really of no significance to our presentation.  No problem.  Chalk one more up for the House Managers!!!