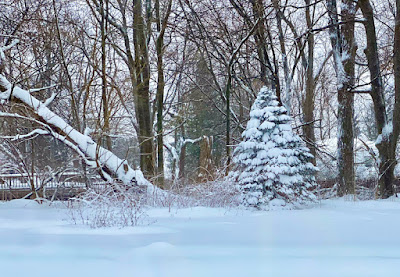 Well, we measured 2 1/2 feet here in our yard.  Took several hours to shovel out the car and trucks...and that was after shoveling out several times yesterday.  Central Park may have gotten only 16+ inches, but we topped that amount up here in Cornwall!

The streets are mostly cleared in the town but folks are trying to dig out and several businesses are closed.

Interesting...we are supposed to be in the 40's by the end of the week.  Flooding will probably be next as the rivers swell with all the runoff.

Taking all that in, it sure was beautiful watching the snow yesterday (and today...it's snowing right now!).  And the entire area is blanketed in white...like the tree above!

As I said, I did some crafts this past weekend.  Along with the mask covers, I made a felt woven heart.

Here's what you need:  Two colors of felt, a scissors, a pattern, needle and thread, buttons and a sewing machine (although you can do it all by hand.  The pattern shown is cut on the fold (straight edge) then the three slits are cut.

To weave, one piece either goes in between the folded strip or vice versa.

When finished weaving the heart, straighten out the weaving so it is even

You can see how open the pocket is with just the weaving. 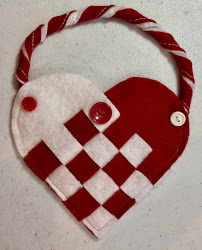 What I did was to sew up the sides of the heart to make the pocket studier.  I then added two buttons to the heart in the center...one in the front and one in the back.  I cut two 12 inch strips of felt, one red and one white and sewed them together down the middle.  After twisting them together as shown, I attached each end of the twisted felt to the corners of the heart.  After securing, I added two buttons to each corner, one in back and one it front.  The heart is cute but sturdy enough to hold a lot.  Note, there are patterns on the internet, or you can make your own.
Well, I have to say one thing...this new blogging format is awful!  I can't move the pictures without it screwing up the text.  Wish we could use the older format.  It has taken much too long to create this post!
That's all for today...
Stay safe and warm...
Talk with you tomorrow...
Posted by Gretchen at 12:04 PM
Email ThisBlogThis!Share to TwitterShare to FacebookShare to Pinterest
Newer Post Older Post Home