DOWN THE CHRISTMAS MEMORY LANE...

DECORATIONS THAT TUG AT MY HEART
This week's journal prompt is about keeping decorations that mean something. It hit me as I was decorating that there were some things that I really wanted to keep even when I downsize again. I don't know if you have anything that brings back fond memories that 'tug at your heart' but I do have a few.

The first one is the very first Nativity Set that I and my husband bought on our first Christmas together. We got it at Hammel's Department Store in downtown Mobile on Christmas Eve. We only paid $5.00 for it which I am sure even then was way too little, but the store was closing and I remember the clerk saying it was the last one and she thought it would be a perfect for us! 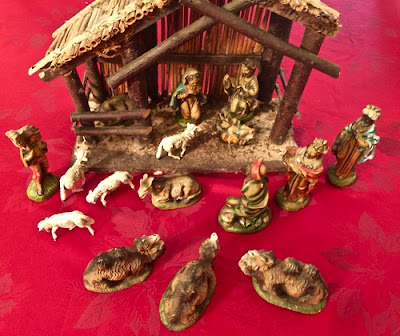 After our first child was born, my husband bought me a music carousel box for Christmas. 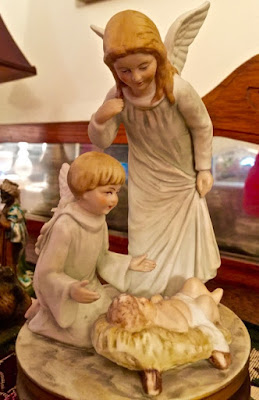 One thing I remember is that our first child also broke the wings off the tall angel because he enjoyed playing with it so much. He would wind it up and then put it on the floor and watch it go round and round as the music played.

Later on, after all four children were around, we were shopping at Target in Minneapolis after Christmas because they had great sales and we fell in love with this little statue. It's not much but it's always been part of our decorations. 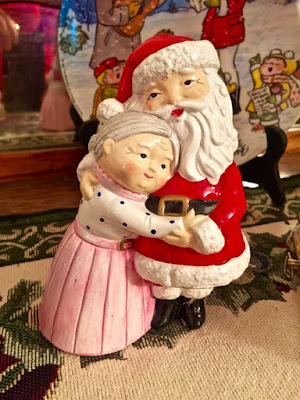 My husband loved Christmas and was always buying decorations, especially little Hallmark statues. We had three boys and one girl and these were on the coffee table during the holidays. The kids would play with them before the school bus stopped to pick them up. They still reside on the coffee table at Christmas. 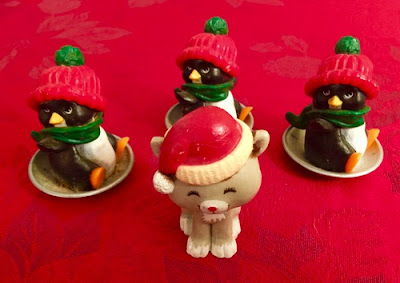 Well, those are my four favorites. Interestingly, none of them cost very much. Guess Christmas doesn't always come with a big price tag!

So how are your holiday plans coming along? I have all the out of town family presents purchased, wrapped and in boxes ready to be mailed tomorrow. Since I have a car full of donations, I figure that I will go out to Valley Stream and take care of those two things. Plus, the left turning light in Lady J is out so I will need to go to my service folks to have the light changed. Weather is supposed to be nice - no rain, ice nor snow. Always a plus when driving.

I had a dental appointment today...the next step in the implant process which meant the last large payment. These are not cheap folks. Today included a bit of cutting and stitching...not too bad but it still has that lingering discomfort.  Two weeks from now I get scanned so they can make the tooth and finally...a implant tooth.

Getting old has it's benefits, but it also has it's drawbacks. I guess they even out in the end!!!

The regular college games are done. The Navy-Army game this past Saturday was good. At least the part I was able to see. And Army won. For those of you who don't know, Army very seldom wins so it was a treat to see them victorious.

That's all for tonight...
Thanks for dropping by...
Talk to you tomorrow...