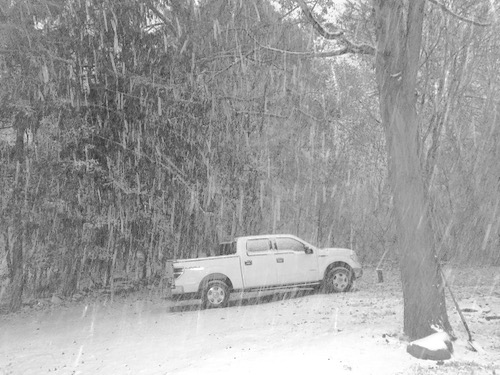 ...we are getting the snow...about eight inches...followed by ice, that followed by rain. Then rinse and repeat, in other words, snow, ice and rain again.  Should be messy.  Those long streaks are falling snow. SnowWhite will blend right in!

They even ran an emergency notification on tv/radio about the snowstorm this morning. I thought it was another test!  I think they are looking for massive electrical outages with this storm even though it is fast moving.

So, if I was back in Brooklyn, the stores would be crammed full of folks and empty shelves. Out here not so much.  None of the parking lots around grocery stores were full when I was out and about - not at a grocery store.

I went to Home Depot because my bedroom is cold. I want to put the plastic window covers on the windows in my room and I needed insulation strips to go around the outside door.

Today is a soup day but since I didn't have enough time to make one early this morning, I made some jethra instead.  It's a dish of lentils and rice mixed with lots and lots of onions that have been slowly browned to bring out their sweetness.  Great 'stick to the ribs' inexpensive meal which everyone in my family loves.

Today was taken up with monthly jobs...read that paying bills. Not a favorite chore of mine but one which must be done. I am thankful that there is money in the checking account to pay them.

So at almost 5pm, it is dark out. I know that part of that is because of the clouds, but I really do not like that it gets dark so early. At least it is light in the morning when I drive to the bus. But in less than two months, the days will grow longer once again.

Well, I think I will check out some of my projects. It's been so long since I have really done anything creative I am feeling that something is missing, kind of empty, if that makes any sense.

Hope all are well and safe...
Thanks for dropping by...
Talk with you tomorrow...