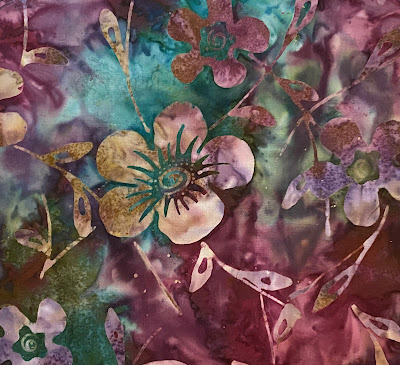 Well, we do have some snow, only a couple inches but it looks so pretty and white...and bright even though it is cloudy out.

I took Dale to the vet because of his cough.   He wouldn't cough for the vet, of course.  Cats do not do 'on demand'!  But, he said that the cat was in great shape - heart, lungs - just a wee bit heavy.

Yesterday I finally finished up the catalog for the guild with all the fabric for sale.  Tomorrow I get to send it out in several segment...five or six emails altogether.

Tonight we had the second guild meeting of the month...and again it was well received.  It only lasted an hour so that was a plus.

I think that's the end of big projects for the guild other than two newsletters a month and, of course, continuing to plan the meetings which will be a breeze after all the big projects we have had.

Tomorrow I think I would like take it easy and just enjoy my studio...maybe continue working on my mandalas...maybe work on some woven hearts...maybe even try my had at making a video of me crafting.  But, alas, there are zoom business meetings and emails to send.  Oh well, maybe later...